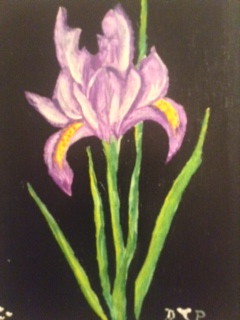 Thank you, Dale Presley! Love your art! This Iris seems so real like just freshly picked from the garden.

When I see an Iris I see and think of a rainbow and the promises of God. You are a promise. I have heard and read that all His benefits belong to each of us that call to Him.

And, thanks for the fig preserves. My favorite! You are so blessed with multi talents and gifts. Thanks for using them and sharing with me!